A Chance to Trade the Ground Floor

Many investors look at great performing stocks and wish they had gotten in “on the ground floor” or before the company’s value was obvious to everyone. Well, right now, the opportunity to invest on the ground floor might be possible in the cryptocurrency markets.

To understand the potential of the markets, and to review how early opportunities can be easy to dismiss, it can be beneficial to consider the history of options, a type of derivative investment security that is widely used and accepted now.

Options Were Once Unknown

Although options are now commonly employed by large and small investors, they are a recent development.  The first options exchange, the CBOE, didn’t open until 1973. But, options had existed for centuries by that time. 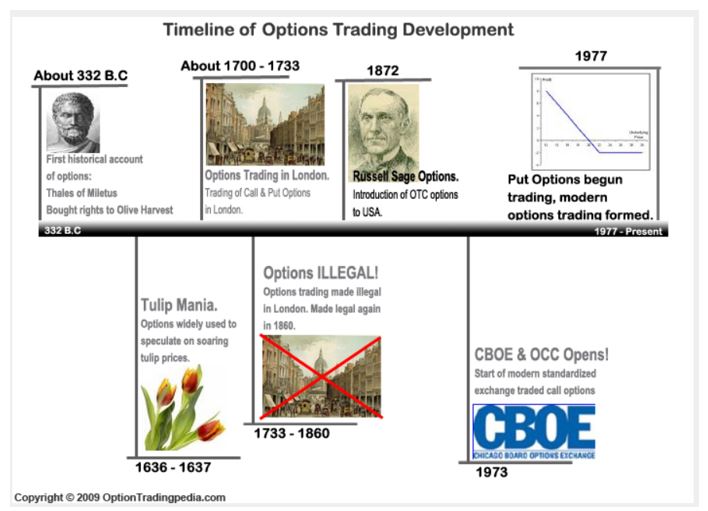 Over time, the math of the markets also advanced. Coincidentally, or perhaps not, in addition to being the year the CBOE opened, 1973 was also the year a mathematical breakthrough made the products easier to trade.

It was in 1973 that two economists, Fischer Black and Myron Scholes, published an article explaining a model for calculating the theoretical estimate of an options price over time.

At the same time, their colleague Robert Merton published an additional study and mathematical amplification of the Black-Scholes model.

As FINRA, the financial regulatory authority explains, “With an exchange created and a solid model for pricing, new options contracts were issued subject to standardized terms, such as uniform expiration dates and established “strike” prices, or the price at which the option could be exercised.

The market flourished and was subject to regulatory oversight on par with U.S. stock markets, with trades guaranteed by a central clearing house, The Options Clearing Corporation.”

At that time, in 1973, there was no way of knowing if the options contracts would be popular with investors and if they would serve an economic purpose for investors. There were reasons to think of the new market as a novelty.

Early trading at the CBOE was restricted to call options, which give the buyer the right but not the obligation to buy shares of stock at a predetermined price for a predetermined amount of time, in just 16 stocks.

Over time, the listed options market spread to additional exchanges and new products were created, including put options, which grant the buyer the right to sell shares at a predetermined price for a specified period of time.

Another popular product that was created was options on stock market indexes which are settled in cash. These products allow investors to easily manage or hedge portfolio exposure and smooth portfolio returns against indexes like the broad based S&P 500 and Russell 2000, or narrower indexes like the NASDAQ 100.

In less than ten years, by 1982, the listed options market hit a milestone when more than 500,000 contracts were traded in a single day. Options popularity continued to increase with more than 3.8 billion equity options traded a year, an average of 16.9 million contracts a day across a dozen exchanges.

Crypto Could Be In the Early Days

Many of the pioneers in the options market were richly rewarded. Crypto investors could be looking at a similar opportunity.

This opportunity could be illustrated by the existence of a reputable exchange, Coinbase. With $150 billion in assets traded across more than 20 million customers and 2017 revenue reported at $1 billion, it’s plowing money back into a master plan to stay ahead in a much larger cryptocurrency economy.

According to CNBC, the company is best known as the leading U.S. cryptocurrency trading platform. But, the company has additional plans.

“We don’t see ourselves as a crypto exchange,” said Coinbase president and COO Asiff Hirji. “We are very focused on the establishment of the crypto economy. We see ourselves as enabler of that future economy.”

Coinbase is working to make crypto trading more accessible and recently announced that it is launching a new version of its GDAX platform called Coinbase Pro and acquiring crypto trading relay platform Paradex.

The new platform seeks to “make the trading experience easier and more intuitive,” according to the startup. Other features include a new chart system which provides streamlined access to historical data and a consolidated portfolio view.

But, competition is on the way.

The parent company of the New York Stock Exchange has been working on an online trading platform that would allow large investors to buy and hold Bitcoin, according to emails and documents viewed by The New York Times and four people briefed on the effort who asked to remain anonymous because the plans were still confidential.

Competition could improve the trading experience for many investors. It should reduce the costs of trading and that would potentially improve the profitability of trading. Competition is also an important step towards more widespread acceptance of cryptos.

Multiple markets make products more accessible to large traders who can then split orders to lower their costs and improve the liquidity they need for trading. This is almost a necessity for the entry of very large traders like those that are found in stock and fixed income markets.

There are many parallels between the history of options and where we are in the crypto markets today. Both require math to understand and the math is becoming increasingly accessible. Both require the acceptance of the financial community and both at times have unsavory reputations among some.

However, options delivered large gains to investors and crypto may very well do the same.