There’s a New Investment Opportunity. But Should You Take It?

Jumpstart Our Business Startups Act, or JOBS Act. While having many different functions, the one that has captured the most attention is the area surrounding crowdfunding.

There are limits on the deals that smaller investors can participate in. The offers must follow a highly prescriptive set of rules. The offer must be listed on a FINRA approved funding portal or with a Broker Dealer. Investors are limited in the amount they may invest. 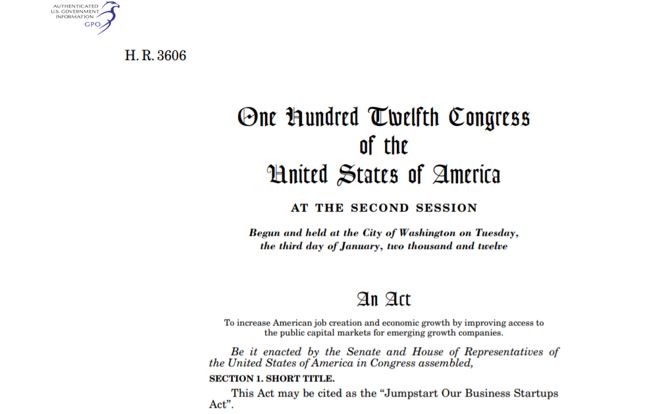 But, even with restrictions, this is a new asset class that every investor should consider. Before getting into the details, it’s important to remember that this investment, like all others, combines the ideas of risks and rewards. High rewards require accepting high degrees of risk, and both are available in this investment category.

A recent Forbes article summarized the performance of one crowdfunding web site:

“Does the potential for a 40 per cent plus returns over three-and-a-half years or so offer sufficient incentive for a 40 per cent failure rate? Those are the numbers that jump out of the report published today by Seedrs, one of the UK’s big three equity crowdfunding platforms, into the performance of companies that have raised money with it.”

The average returns worked out to 14.4% a year for deals on the site. But, investors in this field will pick and choose which deals they participate in. It’s unlikely they will achieve average returns unless they invest in a very large number of deals.

Since the investor will be selecting individual deals, there is another important piece of information to keep in mind from that article. That is the fact that 41% of the deals lost money. Some lost 100% of investors’ money while others suffered smaller losses.

Several web sites allow small investors to participate in this opportunity. While the goal will be to create passive income, the investor may need to be patient and expect money to be tied up for some time before returns are seen.

Among the sites offering deals is CircleUp which has raised over $300 million since the site began operating in 2012.

CircleUp co-founder and COO Rory Eakin said that he believes the company will be able to “find patterns and signals” and is “pioneering the advent of data and analytics.”

While CircleUp is using technology to make its investments, the investments themselves will not be in the technology category. Instead, CircleUp is looking at categories like food and beverage, and personal care. Eakin says CircleUp’s strategy is “companies that produce something that sit on a shelf.”

Fundable has raised over $411 million for startup companies. LocalStake allows investors to focus on the communities they want to buy into. That could be their local community or a community an investor believes is growing and could provide diversification.

Wefunder is designed to be a platform connecting investors with startup founders. It highlights the source of “information regarding companies on Wefunder is provided by the companies themselves. Wefunder may assist a company in presenting this information, but we don’t verify its accuracy or endorse the company.”

That is an important factor to consider in the investment. There is a great deal of research required to verify information since it will be initially provided by the company.

It is important to remember that these are long term investments. LocalStake notes, “If you decide that you no longer wish to remain invested during the fundraise, you can cancel your investment for any reason up to 48 hours after the business countersigns your investment documents at no charge.”

After 48 hours, you are committed to what could be an illiquid investment that could take years to recover. Or could result in a complete loss.

While there are risks to crowdfunding small businesses, there are also potential rewards. Passive income from business startups is possible for investors who can accept the risks.

The University of Chicago recently asked, “Does equity crowdfunding increase the odds of success?”

Their answer may be illuminating:

“The early days of equity crowdfunding have yielded mediocre results compared to VC and angel investing.

Equity crowdfunding has been in active use in the United Kingdom since 2011 and is supported by government initiatives including the Seed Enterprise Investment Scheme, which gives investors tax breaks on early-stage investing. But early results appear to be mixed.

A headline from this past September in the London Telegraph read: “First crowdfunding results: 70 go bust, one makes money.”

According to the article, which cites research from finance data provider AltFi Data and law firm Nabarro, of 367 companies funded via top crowdfunding websites in the UK between 2011 and 2013, nearly 20 percent went out of business, while only 16 percent went on to raise additional capital at higher valuations.

Only one, or 0.2 percent, exited—and it is estimated that its investors received a modest 2.5 times their money back.

Compare these results to those of a 2015 study by data analytics company CB Insights that looked at a cohort of 1,027 start-ups initially funded in 2009 and 2010 by venture capitalists.

In that group, 40 percent raised a next round of capital, 22 percent exited, and 1 percent reached valuations of over $1 billion. And according to a 2017 report commissioned by the Angel Capital Association, 11 percent of angel portfolio companies had a positive exit.

Granted, equity crowdfunding is very new, so the early results may not be indicative of future performance.

However, additional research is turning up some possible reasons companies choosing to go the equity-crowdfunding route may continue to underperform compared with those that receive venture capital and angel backing.

An analysis by law firm Millyard Tech Law of the first 100 US-based crowdfunding campaigns launched after the SEC rules were first published finds that 50 percent of the campaigns were for equity while the others sought debt.

Of the companies that chose equity-based campaigns, 60 percent had been in business for less than one year at the time of their fundraising. It is rare for companies this young to qualify for angel funding, much less venture capital.

Also, equity crowdfunding may not be an entrepreneur’s first choice for funding.

A July 2018 study by Ghent University’s Xavier Walthoff-Borm and Tom Vanacker and University of Côte d’Azur’s Armin Schwienbacher finds that the 277 firms that sought funding between 2012 and 2015 on Crowdcube, a leading UK crowdfunding platform, were less profitable and carried more debt than similar firms that didn’t seek crowdfunding.

Further, the failure rate for the companies that successfully completed a funding campaign was similar to or higher than for those studied that did not seek this kind of funding. Meanwhile, more than 40 percent of the start-ups that didn’t raise the desired capital on Crowdcube failed.”

This study might indicate investors should consider the wisdom of Groucho Marx when offered an opportunity to invest in a small business. Groucho supposedly said, “I don’t care to belong to any club that will have me as a member.”