The Truth About Pensions 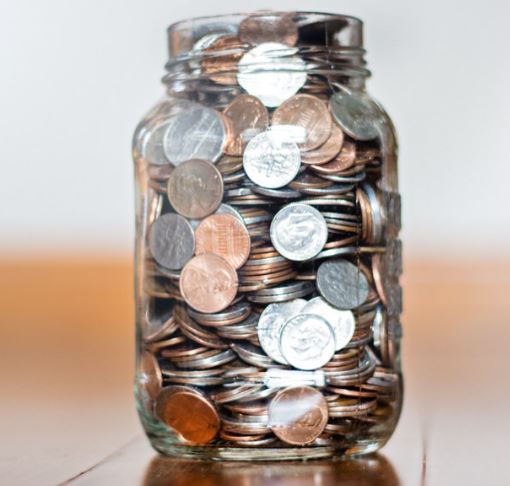 Millennials, and in fact almost everyone, seems to long for the good old days. Those were the days when employers offered pensions and retirements were secure. The data certainly shows that’s not how it is for employees right now.

The chart below shows the average tenure, or time on a job, for various age groups. The trend looks like one would expect it to with tenure increasing by age group. 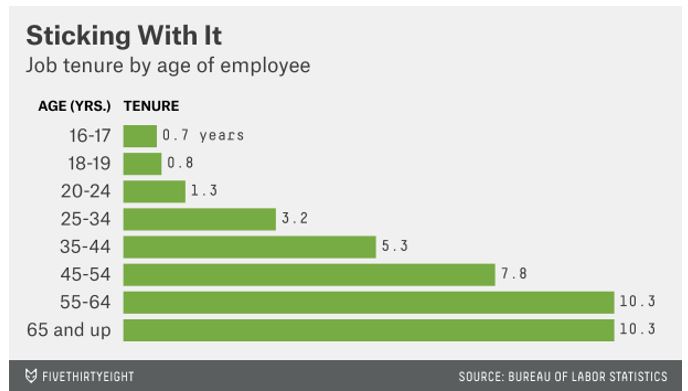 But, the number of years on a job even for the average employee nearing retirement, those over 55, seems low. In fact, it could be too low to qualify for a pension. Many defined benefit pensions require employees to be on the job for 20 years, or even 30 years, or more to earn a pension.

Some analysts look at the data in the chart above and conclude that the problem is at least in part to do the recent economic stagnation. Many employees lost jobs in the Great Recession which pushed employment to 10% in 2008 and 2009. That reset the clock for many employees who were near retirement.

This creates the longing for the good old days, the times when pensions seemed to be a standard component of a retirement plan.

But the current data is not all that different from what it was a few decades ago.

The Bureau of Labor Statistics looked at this problem in 1997, another period of time when employees often longed for the good old days of job security and pensions. Their report, entitled, Employee Tenure in the Mid-1990s, found:

“Among men, median tenure with their current employer fell between 1983 and 1996 in nearly every age group.  The overall median for men remained flat at 4.0 years, however, as the age distribution of employed men shifted to older age groups, where workers have longer tenure.

Median tenure for women had changed little from 1983 to 1991, but was up slightly in 1996 to 3.5 years, according to data released today by the Bureau of Labor Statistics of the U.S. Department of Labor.”

Data by age group was also provided and the shape of the data distribution will look familiar to the first chart shown above.

For those at or near retirement age, from the data points available for 1983 through 1996, the average time on a job was still not enough to generally qualify for a pension based on longevity.

Pensions Were Always Something to Worry About

Barron’s recently noted the generous pensions some large companies offered were only possible, in part, because so few employees qualified for the pensions.

“The reality is that very few people worked at one company long enough to get a pension that could support them in retirement. That’s true even at blue-chip companies like AT&T and IBM, which offered the kind of pensions on which legends are built.

In fact, policy expert Dallas Salisbury, former head of retirement think tank Employee Benefits Research Institute, said he invited a pension actuary who had worked at AT&T to talk to EBRI about how exactly AT&T could afford such rich benefits.

His answer: Only about 10% of employees worked there long enough to get a pension, and just a fraction of them got the full benefits.”

Based on BLS data from the 1970s and 1980s, professionals needed a 30-year tenure before they were eligible for a pension that amounted to 30% of their last year’s income.

Despite the lore of the “company man,” the median tenure for all wage and salaried jobs in 1983 was five years, about where it was in 2016, based on the latest EBRI data.

“This myth that since ‘I worked for a company with a pension, I’d get a good pension’ was the common belief, so people didn’t worry when they should have, and didn’t save,” says Salisbury.

“There isn’t a more acute crisis now. Far more Americans are saving for, and thinking about, retirement—and actually have real benefits.”

The next chart again strikes at the argument that the pensions were generous in the good old days. Even an employee working 40 years at the same company received just more than a third of their pay as a pension payment. 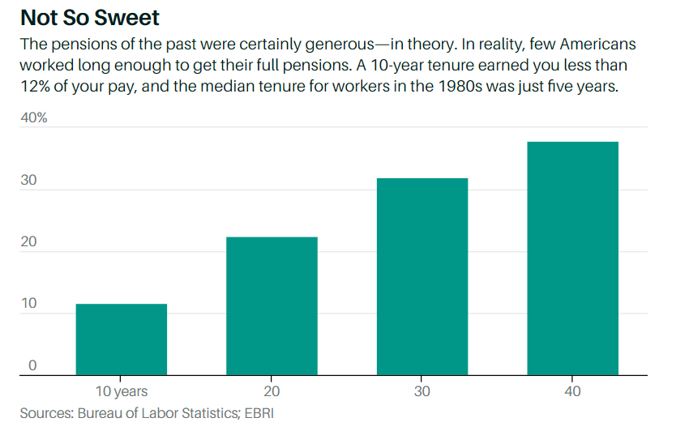 This demonstrates the problem of retirement income has always been significant. The good news is that more tools are available to deal with the problem now.

What This Means Today

Salisbury, the expert cited above, has advice for retirement planning. First is the near standard advice that to delay taking Social Security until 70, which means a bigger benefit. Many will not be able to do that, but if it’s possible that grows retirement income significantly. In fact, income grows each year the initial receipt of Social Security is delayed.

He also says he has always been a “strong believer” in annuitizing income. One option is longevity insurance, which requires a smaller lump sum and doesn’t usually kick in with payments until someone turns 85; that’s why Salisbury says 70 is the “most efficient” time to buy such a policy.

For those trying to come up with the right formula to tap their nest egg, Salisbury says the Internal Revenue Service’s required minimum distribution formula for when people turn 70½ is a good rule of thumb.

“That’s about as fast as you should take it out,” he says, adding that it encourages people to live within their means, even if that means downsizing.

In other words, some things about retirement haven’t changed: People still need to save more and spend less.

“Is it new and unusual for people to hit retirement with limited savings and having spent their money on their kids’ education? It has happened for decades,” Salisbury says. “The only difference now is that there is data on it.”

This really all means the secret to financial security in retirement for most people is the same as it’s always been. Save as much as possible. Delay retirement as long as possible. And, consider financial products that match your needs.

Longevity insurance and annuities are frequently given bad press. But they are available because they are right for some people. They should be researched and considered by almost all retirees with an open mind.