A Sector That Marijuana Could Push to Higher Highs

The bear market is a distant memory for many investors. It was 2008 when stocks began plunging and by March 2009, a bottom was in place. The bear market pushed market averages down by more than 50% but all have recovered to new highs by now. Most industries are at new highs but, not all.

E*Trade Financial Corp. (Nasdaq: ETFC) reported that the company added 64,581 gross new brokerage accounts in January. That’s the most in a month since September 2016 but it came just days before the market crashed. 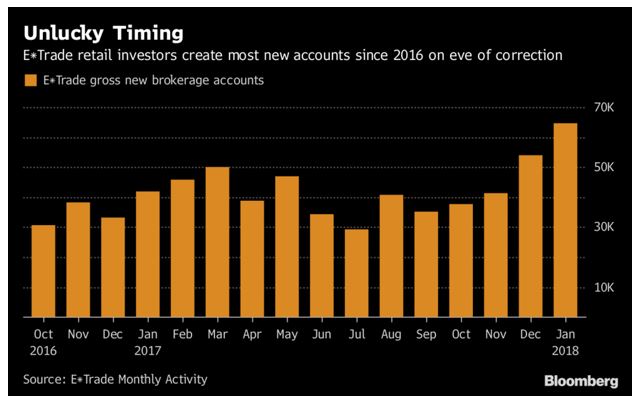 The rush to open accounts comes amid a price war that is benefiting individuals. Schwab cut its commissions from $8.95 per trade to $6.95 last February and then, just weeks later, cut commissions again to just $4.95 after others matched its initial cut.

Commissions are just one source of revenue for the industry. Brokers also make money from fees they charge account holders. Investors also pay interest if they invest on margin. Brokers can also earn money from exchanges for directing customer orders to a particular venue in some cases.

Additional revenue for a broker can come from lending shares to facilitate short trades. Some brokers will make money by matching orders and making earnings between the buying and selling prices. In other words, commissions might not be the most significant source of revenue for some firms.

According to Investor’s Business Daily, trading volumes at the online brokers are up, in part due to interest in Bitcoin, blockchain, and cannabis-related securities. Both Ameritrade and E-Trade said such trading has represented roughly 10% of daily average revenue trades.

“We’ve said in January to date, our trading levels are literally near 1 million,” Ameritrade CEO Timothy Hockey told analysts on the Jan. 22 earnings call, according to a Seeking Alpha transcript. “If you zeroed out all of the cannabis and the blockchain-related symbols, you’d still have a number that’s just shy of 900,000 in trading.”

These trends are bringing younger investors into the stock market trading.

Hockey, the Ameritrade CEO, said that millennial account openings are running 72% higher than a year ago, but the online brokers are applying safeguards when it comes to new Bitcoin futures trading, with only select customers invited to take part.

Opening Bitcoin futures trading to all their customers is “not safe for the customer, it’s not safe for us,” E-Trade CEO Karl Roessner told analysts. “You really have to know what you’re doing if you’re going to engage in Bitcoin-related futures. We’ve built out the risk framework around it. We made sure we have the right margin requirements against it.”

Instinet analyst Steven Chubak has found at least five significant “policy tailwinds” he says will drive results for investment banks and brokers for the next year.

“The Fed is one of the key narratives,” Morningstar analyst Michael Wong told IBD. Traditional banks benefit from a wider spread between short-term interest rates – the rate at which they borrow – and long-term rates at which they lend.

Online brokers and wealth management firms are more leveraged to short-term rates, on which floating-rate margin loans for trading accounts are based. TD Ameritrade CFO Stephen Boyle said on a recent earnings call that the next 25 basis point increase to the Fed’s target rate could yield an estimated $60 million to $110 million in pretax income.

Interactive Brokers said the next rate hike would add $15 million in net interest income over a year, with CFO Paul Brody explaining that “our policy of giving our customers the benefit of future rate increases will necessarily limit our upside here.”

Morningstar analyst Wong calculates that of Schwab’s $1.1 billion increase in net revenue in 2017, 84% came from net interest income. That was a key to offsetting the 34% decline in its average revenue per trade, to $7.33, and other fee cuts.

Given Schwab’s “massive scale and industry-leading cost efficiency, we believe the company can sustain severe competitive pressures, such as trading revenue dropping to $0, and still earn above its cost of capital,” Wong wrote in a Jan. 5 research report.

Instinet’s Chubak estimates that net interest income accounted for at least 50% of revenue at Schwab, Ameritrade and E-Trade over the past year. Commissions make up just 8% of revenue at Schwab vs. 20% at E-Trade and 36% at Ameritrade, according to Chubak, who also assigns a 24% upside to earnings from tax cuts for the online brokerage group.

Among the firms to consider in this industry are LPL Financial Holdings Inc. (Nasdaq: LPLA). Analysts expect the firm which has more than 14,000 financial advisors and $475 billion in assets under management to report earnings growth of 27% this year.

The stock has already broken out to new all time highs.

Schwab is also at new all time highs.

Like LPLA, SCHW is a leader in its sector and market leaders could be the biggest winners in the rapidly growing investment industry.