Robots Could Be the Next Big Investment Theme

Robots have been an almost constant theme in the public imagination for decades. Television shows in the 1960s often featured robots in households, making it appear as if the future would be filled with affordable and useful robots.

In the television shows and cartoons, the robots were lifelike and almost human. In the real world, the current robots available are often useful but not always like humans. 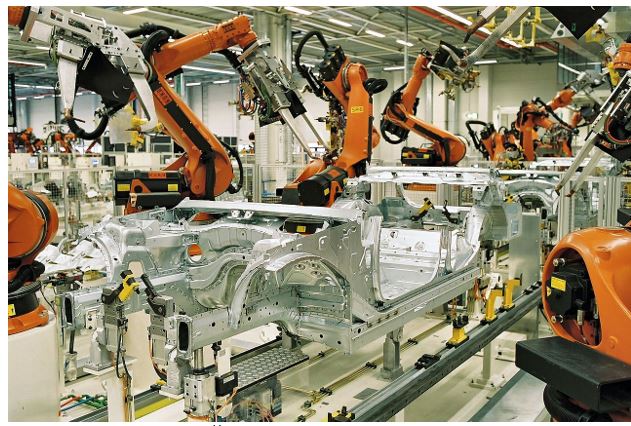 Machines like this are increasingly common in the industry. 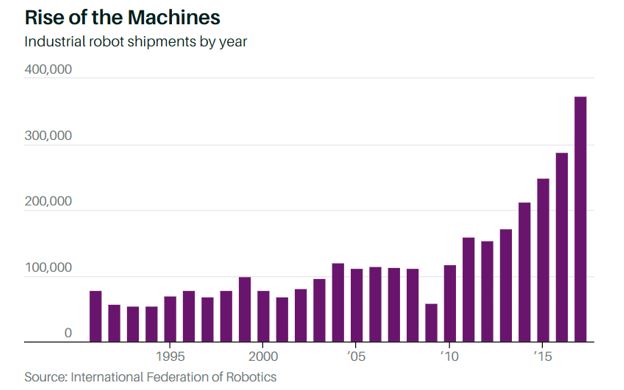 At General Motors, according to a recent article in Barron’s, 13,000 of the 30,000 robots in its plants worldwide are now connected. Each day, those robots feed operating data into the cloud. GM uses the data to do predictive maintenance on its machines to improve plant uptime.

Technology is also enabling robots to do more. The sorting of red and green pills in the Fanuc facility wasn’t directed by any human. The machines recognize color and can react to object orientation and a changing environment like never before.

A fast-growing niche is collaborative robots, or cobots. These smaller robots work alongside humans and are cheaper, easier to program, and appeal to smaller enterprises that wouldn’t have considered robotic automation in the past. 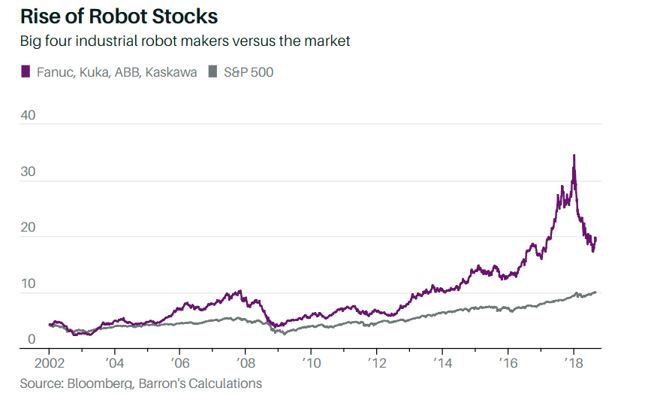 The new technologies are part of what manufacturing executives are calling the next industrial revolution, one that makes robotic automation accessible to a wider assortment of customers.

Already, growth has been explosive. Robot deliveries have grown 19% a year on average for the past five years, up from the 5% annual growth averaged in the previous 20 years.

For investors, there are opportunities to be found in the major robot makers but they are largely on overseas markets.

Fanuc, a Japanese company, is the largest. Other large makers include Japan’s Yaskawa Electric and Germany’s Kuka. ABB Group (NYSE: ABB) and Teradyne (Nasdaq: TER) are U. S. based companies that could be potential investments.

Barron’s noted that, “Teradyne is particularly attractive. Robots are 12% of total sales but the business is growing rapidly, and investors don’t give the company credit for that growth.

Its stock trades for 17.2 estimated 2019 earnings—a small premium to other semiconductor equipment companies that don’t have high-growth franchises.

Teradyne’s automation business generated $261 million in 2018, and Weston Twigg, an analyst with KeyBanc, says that cobots can be a $1 billion business by 2021. That’s a huge opportunity for a company with $2.1 billion in revenue.

Based on the multiples paid for other high-growth industrials and for Teradyne’s semiconductor peers, the company’s shares could double over the next couple of years.” 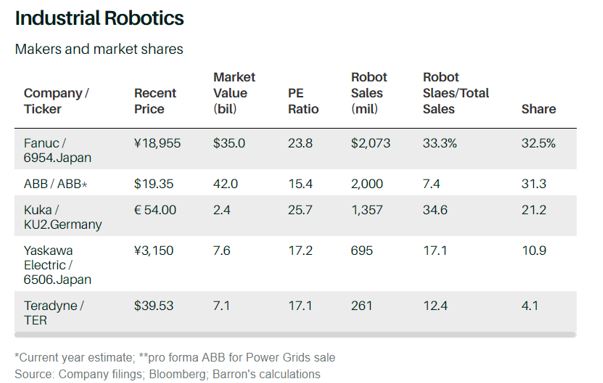 Barron’s has also been bullish on ABB because the company is selling its slower- growth power-grid infrastructure business. What’s left will be dedicated to electrification and advanced automation technologies—including robotics.

The site noted, “It’s impossible to write about growing robot use without considering the impact on factory workers. One side of the debate worries that robotic automation steals jobs from the people who have the most trouble training for a new career. The other side maintains that higher productivity will create more jobs.

Everyone in the robotics industry is painfully aware of this debate. Robot users are quick to point out that they apply robotic technology to dirty and dangerous jobs they have trouble filling.

The penetration data also point to the potential demand. To increase robot density to the levels of those three countries, the industry would need to ship four million to five million industrial robots—more than 11 years of production at current rates.

(There are only about two million robots around the world today.)

Consider what happened in aerospace when China emerged as an economic power. Boeing ’s backlog went from three years of production to seven. Along the way, its valuation went from 15 times estimated earnings to around 18 times. The robotic backlog is expanding in a similar way.

Fortunately, you don’t have to rely solely on a Boeing-like multiple expansion with industrial robots. Higher growth and a stable industry structure should do the trick for investors in Teradyne and ABB.”

Investors could also consider an exchange traded fund (ETF) that tracks the industry.

Robo Global Robotics & Automation ETF (NYSE: ROBO) is a fund with more than $1.3 billion in assets. The fund’s sponsor notes that “ROBO was the first robotics and automation ETF to market, providing investors with a liquid, cost-effective and diversified way to gain access to rapidly evolving robotics technology and AI.”

Bill Studebaker, CIO of ROBO Global, reminds investors that this could be a volatile investment. He recently said, “The market is not good at pricing exponential growth, and this is what we’re seeing in robotics and AI.”

An example of the type of company the ROBO ETF holds is Zebra Technologies Corp., which specializes in automated sensor and scanning technology.

“When you look at Zebra, if you order anything from Amazon.com over the holidays, chances are that Zebra Technologies was involved in your order,” Studebaker said. But older companies are also involved in the sector.

Deere & Company (NYSE: DE), according to Studebaker, is in the portfolio because “over 60 percent of their tractors have autonomous mobility capabilities.”

The biggest problems in the world today represent opportunities for AI and robotics companies in the long-term, Studebaker said.

“AI technologies and applications are becoming central to every industry, and I think now is the time to focus on investing,” he said.

Studebaker compared the impact that automation and AI will have on the business world to the impact the internet has had in the last two decades.

“As we look out the next three, five, ten years, investors I think are going to look back at this opportunity and say, ‘Why did I miss it?’”

However, this is a risky sector and risk should be considered before making any investment in the industry.