Traders are pricing in a dramatic shift in Federal Reserve policy. Market expectations of Fed policy can be easily determined and are available to traders free on line. The CME maintains a site showing what current expectations are for each of the Fed’s meetings over the next year.

Using 30-Day Fed Fund futures pricing data, which have long been relied upon to express the market’s views on the likelihood of changes in U.S. monetary policy, the tool visualizes both current and historical probabilities of various FOMC rate change outcomes for a given meeting date.

The tool also shows the Fed’s “Dot Plot,” which reflects FOMC members’ expectations for the Fed target rate over time.”

Changes in expectations for the Fed’s next meeting are shown in the chart below. 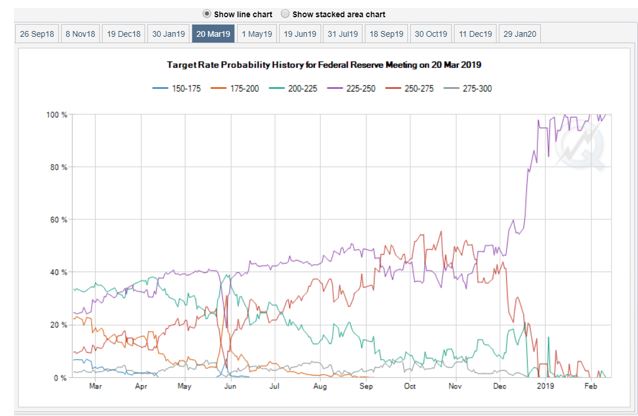 “The betting in the financial markets has shifted from further interest-rate hikes by the Federal Reserve to a possible cut by early 2020. That’s the message from the futures and options markets for short-term interest rates, where wagers on lower rates have increased recently.

The monetary authorities’ pivot, initially articulated in early January by Fed Chairman Jerome Powell and confirmed after the Jan. 29-30 meeting of the Federal Open Market Committee, touched off a steep rebound in stocks and other risky assets.

But some observers in the credit market worry that about rising recession risks. Traders in interest-rate instruments appear to be anticipating that the Fed will be actively easing policy early in 2020 to counter a downturn.”

The news site also addressed potential trading opportunities based on this change in probabilities.

“The high-yield bond market, for now, appears rather blasé about the prospects for a downturn in the economy, as our colleague Alexandra Scaggs wrote [recently].

By contrast, at the other end of the lending market, bankers are tightening their credit standards, according to Steven Blitz, chief U.S. economist at TS Lombard.

This is a response to the Fed’s previous rate hikes, which have boosted the central bank’s target range for federal funds to 2.25%-2.50%, as well as narrowing the spread versus the two-year Treasury note, which yielded 2.533% [recently].

When the gap between these rates narrows, bankers slow credit extensions or even throw them into reverse, Blitz writes a client note.

That was apparent in the Fed’s Senior Loan Officer Survey, which also showed a slackening in the demand for loans across virtually all categories—commercial and industrial, mortgages, commercial real estate, consumer loans—adds David Rosenberg, chief economist at Gluskin Sheff.

The tightening of credit always affects the real economy with a lag, which Blitz explains is behind the Fed’s recent shift in rhetoric.

He thinks the central bank next will slow the pace of the reduction in its balance sheet as an initial step. (When the Fed sells assets, it effectively extinguishes cash from the banking system.) The earliest Blitz looks for a rate cut would be in the third quarter.

According to the CME Group’s FedWatch, the odds favor the Fed standing pat with its current fed-funds rate with outside chances of either a hike or a cut of one-quarter percentage point at each FOMC meeting in 2019.

An easier way for most Barron’s readers to benefit from an anticipated Fed ease would be in a class of real estate investment trusts that invest in mortgages and related investments rather than the typical malls, office buildings, or apartment buildings. That’s the view of Harley Bassman, a former head Wall Street derivatives pro who pens the Convexity Maven blog.”

Mortgage REITs borrow short-term and invest longer-term to earn a spread. That spread has been compressed as the Fed has hiked the funds rate nine times in the past three years, hurting the mREITs earnings and dividends.

Bassman opines this is the bottom of the cycle and the yield curve should steepen, benefiting their income and dividends. “I suspect I am a tad early, but I have never been a ‘bottom picker,’” he writes. That said, he advises investors to be careful with the size of the bet in order to survive a few bumps.

From here, however, how the stock market fares will depend on more than interest rates, notably other factors such as trade and tariffs as well as growth in the U.S. and abroad. That makes betting on interest rates seem almost simple by comparison.”

Investors could consider bond funds or ETFs also since prices of bonds rise when interest rates fall. The largest changes in price occur for bonds with longer maturities so longer term bond funds could be the most aggressive strategy and offer the greatest potential gains. However, longer term funds also carry the largest amount of risk.

However, traders cannot ignore the possibility of a shift in Fed policy and should make plans for lower rates now.