Now Could Be the Time for Gold

The headlines are a cause for concern. This is honestly true at any news site. It can be market news, global headlines or even local news. It is true that news services have always focused on bad news but there certainly seems to be more bad news than ever right now.

Many investors believe gold performs well when uncertainty rises. The chart below shows that could be true right now.

Analysts point to a number of reasons to consider gold right now.

The Fundamental Explanation for Investing in Gold

TradeStops.com recently explained why gold stocks could be an investment opportunity:

“Why are gold and gold stocks doing well in the midst of market turmoil?

In historic terms, it’s no surprise to see the yellow metal zig when everything else zags. Gold stocks performed quite well in the 1930s, for example, due to rising profit margins as operating costs declined and the price of gold stayed fixed.

Heading into 2019, gold and gold stocks are channeling investor worries around slowdown, debt, and inflation. These things are all connected: In the event of global slowdown, debt levels are likely to rise as governments borrow and central banks stimulate.

But with debt levels already high, more borrowing and stimulus could spark inflation and a loss of faith in paper currencies — which benefits both gold and gold stocks.

There are multiple flashing red lights warning of global slowdown right now. One of them is the price of crude oil, the world’s most important commodity. The price for the two major crude oil benchmarks, Brent and West Texas Intermediate, has declined roughly 40 percent since the beginning of October — a historic collapse in such a short space of time. This suggests global oil demand is in trouble.

Then too, bellwether companies like FedEx, who have a finger on the pulse of global business, are talking slowdown. In its latest earnings report — a disappointment — Alan Graf, FedEx’s executive vice president and chief financial officer, said the following: “Global trade has slowed in recent months and leading indicators point to ongoing deceleration in global trade near-term.”

This is a worry because the typical response to slowdown is piling on more debt. Governments step up spending to help the economies, and central banks revert to easy money policies and stimulus.

But the world is already awash in debt, and the debt hangover from the last round of central bank stimulus hasn’t yet passed. According to IMF data, global debt levels are more than $180 trillion. And central banks already have trillions of dollars on their balance sheets, with interest rates at historic lows.

So, it’s not clear governments can borrow more trillions to fight yet another slowdown, or whether central banks can add trillions more in stimulus to their balance sheets, without leading to a pick-up of inflation and a loss of faith in paper currencies.

If that happens, it will benefit gold and gold stocks — possibly in a major way.

The positive trend in gold and gold stocks, even as global stock markets see red, shows investors are giving more weight to this possibility now.

That makes gold stocks increasingly attractive, but it might not be what the rest of the market hopes to find in its stocking.”

Along with gold, uncertainty is increasing. This can be seen in the next chart. 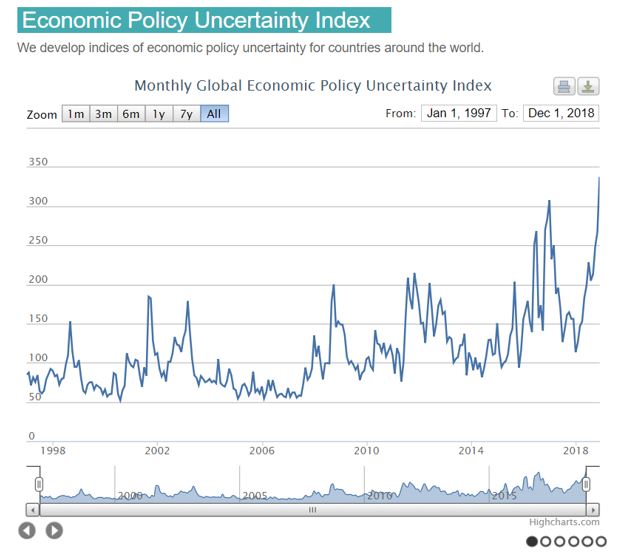 This is the World Uncertainty Index (WUI). The WUI is an index calculated “for 143 individual countries on a quarterly basis from 1996 onwards. This is defined using the frequency of the word “uncertainty” in the quarterly Economist Intelligence Unit country reports.

The level of uncertainty is significantly higher in developing countries and is positively associated with economic policy uncertainty and stock market volatility, and negatively with GDP growth. In a panel vector autoregressive setting, we find that innovations in the WUI foreshadow significant declines in output.”

Notice that the authors call attention to previous spikes which were associated with identifiable crises. Then, you can notice in the chart that the index is at an all time high, even without a single identifiable event to explain. That indicates we could expect increased market volatility and decreased GDP growth now.

Gold Could Be a Hedge Against Uncertainty

It’s possible to directly trade gold. This can be done with coins, ETFs or futures. Coins are collectibles and can have tax consequences that are different than investments in stocks.

Many investors are surprised to learn popular ETFs that back their shares with physical holdings of precious metals face taxes at the higher rate for collectibles. This includes SPDR Gold Shares (NYSE: GLD).

Futures carry their own tax consequences and risks and many individual investors avoid these markets.

Publicly- traded stocks of gold miners offer an indirect way to invest in gold. Mining companies are taxed at the same rate as stocks which can be lower than the rate for gains in GLD or other ETFs.

In addition to offering tax benefits, gold miners also offer the benefit of leverage. An example might be the best way to explain the leverage miners offer.

This is a simplified example so we will assume the company has no other costs and no additional revenue.

The miner is leveraged, in this example, 5 to 1, and benefits immensely from higher gold prices. Even smaller gains in the price of gold have a large impact on earnings. A 1% increase in gold prices (to $1,010 an ounce) results in a 5% jump in the earnings of this hypothetical mining company.

Remember, leverage can help increase investment returns on the upside but can cause significant losses on the downside.

A 1% decline in the price of gold could result in a 5% drop in earnings for this gold miner and we would expect the stock price to reflect the diminished earnings potential of the company. A 20% decline in gold would push the miner from a profit to a loss.

This leverage makes gold miners an excellent way to invest in gold. Buying miners while uncertainty is high could lead to gains in the short run and in the long term.