The Importance of Fundamentals in Crypto Markets 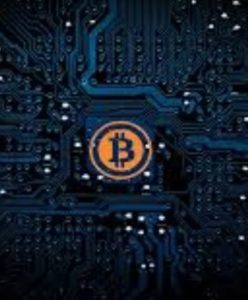 Many investors focus on fundamentals. They search for value in the stock market and are confident in that approach. They point to Warren Buffett as a source of inspiration and shop for bargains.

As Buffett says, “Whether we’re talking about socks or stocks, I like buying quality merchandise when it is marked down.” This approach is difficult to apply to crypto markets for two reasons.

Unlike with socks or the stocks of companies, there is no generally agreed upon definition of quality in the cryptocurrency markets as of now. Some cryptos seem to be of higher quality than others and there are ratings available on some currencies, but there is little research or agreement in the market place.

The second difficulty lies in the fact that there is no generally accepted framework to define the fair value of a cryptocurrency. For socks, the price will vary by the quality of the material used and the skill of the labor involved in making the product.

For stocks, there are textbooks defining value methodologies and the discounted cash flow model is widely taught in business schools. While there are varying assumptions about the inputs to the models, there is a general agreement about the framework for the different valuation models.

With cryptos, the lack of a definition for quality and the lack of uniform valuation models makes the question of fundamentals more difficult to address.

Not All Markets Have Fundamentals

Would you consider investing in a company that was founded with a purpose of “carrying on an undertaking of great advantage, but nobody to know what it is?” It seems unlikely because this fails the quality test and is impossible to value.

Yet, as Charles MacKay recounts in his book Extraordinary Popular Delusions and the Madness of Crowds, even though no potential investor knew what that company did, the founder collected £2,000 for the share offering and promptly skipped town never to be heard from again.

This occurred in the South Sea Bubble in the early 1700s.

In exchange for taking responsibility for the debt, the government gave the South Sea company a monopoly on trade with South America and continued paying 6% interest on the bonds that the company now owned.

Everyone looked like a winner in this transaction. Bond holders became share holders in the wealth being created by exploration of the New World. The government reduced its debt and interest payments. The South Sea Company had cash flow to fund wealth creating ventures in South America.

But, there was really no way to value the business opportunities in the South Sea.

Investors in South Sea Company believed mines in South America would produce unimaginable amounts of gold that would fund other ventures and generate even more profits. This led to speculation in shares of the company.

Researchers subsequently noted, “As speculative trading in South Sea Company stock increased, other joint stock companies were launched on the London exchange.”  As Mackay recorded, some of the business plans were not well developed.

“Another company planned to build floating offshore mansions for London’s elite and yet another had a formula to harness energy by reclaiming sunshine from vegetables. These newly-floated stock issuances were called “bubbles” at the time.”

The South Sea Company experienced a rapid rise and fall, showing the pattern that would be common in other bubbles later in history. 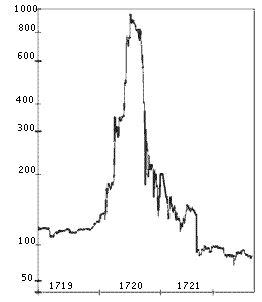 Fundamentals had little to do with the pricing. This would be true in other markets over the next three centuries. 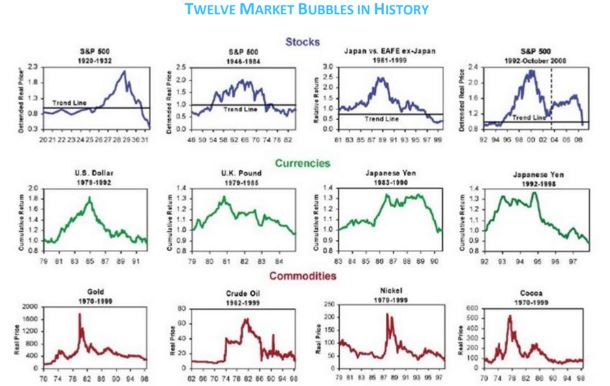 This chart shows bubbles in stocks, repeatedly and around the world, currencies and commodities. Bubbles are obviously severe deviations from fundamentals and demonstrate that fundamentals do not always have a role in market prices.

The Lesson for Crypto Markets

Investors looking for fundamentals often forget that fundamentals do not have much of a role in the current price of most markets. Warren Buffett’s business school professor Ben Graham made this point with the colorful phrase, “In the short run, the market is a voting machine but in the long run, it is a weighing machine.”

What Graham meant was that fundamentals do matter in the long run. The market weighs fundamentals and determines value and that is eventually the factor that determines whether prices move higher or lower over time.

In the short run, Graham called the market a voting machine. Voting is a mix of emotional and rational responses to different factors. Consider a Presidential election in the United States to see how a voting machine can work.

Voters make their decisions based on factors they weigh heavily at the time their vote is cast. The factor could be unemployment or foreign affairs in a Presidential election. The choice of candidates could be rational or emotional or perhaps even random if a voter fails to understand the process and makes a mistake on their ballot.

The truth is if the election were held a month earlier or a month later, sometimes there would be a different outcome.

This is what Graham meant about the market in the short term. Price moves can be based on rational or emotional factors. If the trading is done a day or even a few minutes sooner or later, the outcome could vary.

Markets for cryptocurrencies are like a voting machine and there is no way to know when they will incorporate weighing machines into the markets. That may never happen, but it is likely to at some point.