How a New Risk Could Affect Your Investments

Risk factors are commonly discussed among investors. Many think of the greatest risk factor being a bear market which is characterized by a substantial decline in prices for a sustained period of time. But each investment carries additional risk factors in addition to that shared risk of a bear market.

For Walmart and other large companies, risk factors are identified in long sections in their annual report. The section in Walmart’s 10K that is filed with the Securities and Exchange Commission runs to almost 8,000 words and includes dozens of factors including:

Other risks are more specific:

Walmart explains to investors that “we bear the risk of losses incurred as a result of physical damage to, or destruction of, any stores, clubs and distribution facilities, loss or spoilage of inventory and business interruption caused by such events.”

The inclusion of climate change is a rather recent development in the descriptions of risk.

Barron’s recently profiled the impact of climate change on the operations of different companies. The article began with a profile of Merck:

Since taking over the global supply chain for Merck in 2012, Craig Kennedy has handled tornadoes, droughts, and powerful storms.

Hurricane Maria, which tore through Puerto Rico in 2017, was a more onerous challenge: Merck’s cholesterol drug Atozet and its chemotherapy product Temodar are manufactured on the island.

Kennedy got the factory up and running in a week, but the roads were still a wreck, so he began planning for a new supply chain out of Singapore.

“We weren’t as prepared for the destruction of the infrastructure as we would like to have been,” Kennedy recalls. “You cannot predict what’s going to happen.”

Such dangerous unpredictability is only likely to increase. Stronger and more frequent storms, like the hurricanes in 2017 and 2018, are among the signs of global warming, or climate change, scientists say.”

This is an important investment concern, according to the analysis:

“In recent years, corporations such as Merck (ticker: MRK) have been citing climate change as a risk factor in their annual filings. In fiscal 2017, some 15% of the S&P 500 publicly disclosed an effect on earnings from weather-related events, says Standard & Poor’s Global Ratings.

Only 4% of the companies actually quantified the effect, S&P says. But for those that did, earnings were affected by 6%. (Comparable data for previous years weren’t available, and S&P didn’t identify specific companies.)

Another company, AT&T (T), had $627 million in natural-disaster costs and revenue credits to customers.”

Barron’s “asked Four Twenty Seven, a market intelligence firm based in Berkeley, Calif., to share its climate-risk analytics and determine which of the S&P 500 companies are the most susceptible to extreme weather and climate change.

The firm develops its scores using its databases of corporate facilities, as well as climate and weather data.

Four Twenty Seven looked at 24 industry groups to see which phenomena were material to each industry, and then came up with a scoring system. (The firm is named after a target set by California in 2006 to reduce greenhouse-gas emissions to below the state’s 1990 level of 427 million metric tons.)

It sells its data to financial institutions and corporate enterprises that invest in bonds, real estate, and other securities.

Four Twenty Seven looked at all of a company’s physical sites, whether owned or leased, and then assessed them for exposure to climate-change risk.

Some 70% of each company’s score was for a measure called operating risk, which includes heat stress (the frequency and severity of hot days), water stress (drought-like patterns), floods (the number of historical floods and the frequency of future heavy rainfall events and intensity of rainfall), sea-level rise, hurricanes, and typhoons, and socioeconomic risk (measuring a company’s geographical operating environment and its ability to recover from climate impact).

The remainder of the score combined what Four Twenty Seven calls market risk, or the vulnerability of a company’s end market to climate risk, and supply-chain risk, or climate risk associated with countries that make up a company’s likely supply chain.

What the examination discovered was that some of America’s largest companies, despite high marks for sustainability, remain vulnerable.”

The report listed 15 companies whose facilities have the greatest exposure to climate change and extreme weather. The chart below also show the operations risk, which accounts for 70% of a company’s score, as well as market risk and supply chain risk. 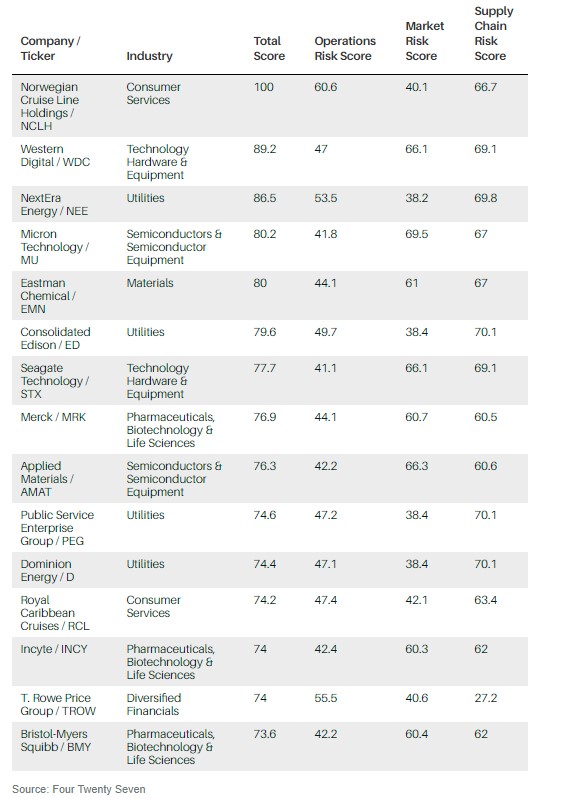 The report also identified the 16 companies in the S&P 500 whose facilities had the least exposure to climate change and extreme weather. 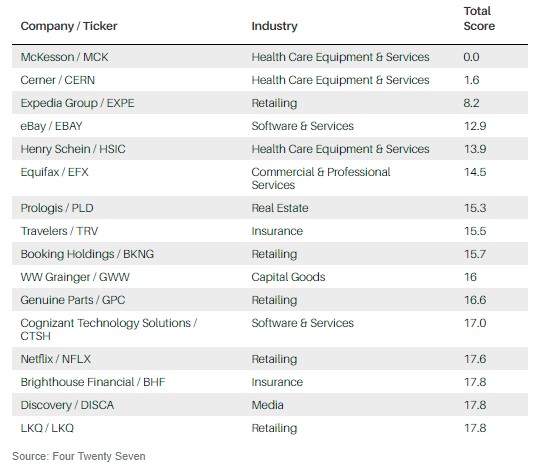 This is now another data point for investors to consider. It’s a new data point and there are no clear guidelines for how this information should be incorporated into an investment strategy. But it is important data that can not be ignored by many investors.