Analysts have been watching earnings season for clues about the direction of the stock market. Earnings season comes four times a year and it is the busiest weeks of the years for analysts who need to incorporate new information into their models.

This earnings season, companies are announcing results for the first quarter of 2018. It is the first full accounting period that includes the changes related to tax reform. Many companies are benefiting from a lower tax rate.

But, tax reform also forced companies to move cash that was held overseas back to the United States and includes provisions to prevent large cash balances from building up overseas again. This is significant because it means companies will make the best use of cash in the future.

This means there have been two big stories this earnings season and both are affecting the stock market.

Earnings Are Better Than Expected

According to the research firm FactSet, as of the end of last week, 91% of the companies in the S&P 500 have reported actual results for the quarter. The results have been significantly better than expected:

The percentage of companies reporting EPS above the mean EPS estimate is above the 1-year (74%) average and above the 5-year (70%) average.

If 77% is the final percentage for the quarter, it will mark a tie with the previous quarter (Q4 2017) for the highest percentage of S&P 500 companies reporting actual sales above estimates since FactSet began tracking this metric in Q3 2008.

In aggregate, companies are reporting sales that are 1.0% above estimates, which is also above the 5-year average.”

The strong gains in earnings have led to a decline in the price to earnings (P/E) ratio, as the chart below shows. 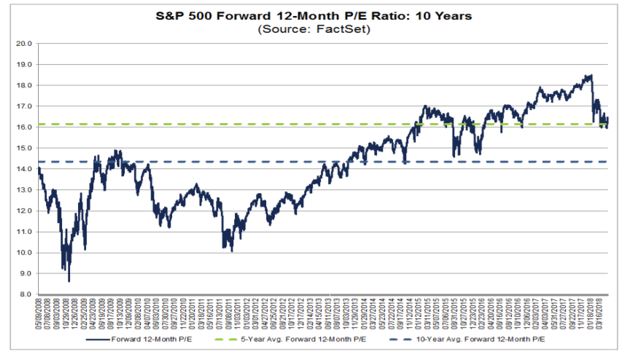 The stock market is forward looking and using expected earnings is an effective way to value the stock market. This is called the forward P/E ratio.

Based on revisions to earnings estimates prompted by the strong earnings reports, the forward P/E ratio for the S&P 500 is 16.5.

Bulls will be able to argue that earnings estimates are still being revised and the earnings picture is likely to be better than expected in the next few quarters so the ratio should be higher than average.

Buybacks Are Also a Concern to Some

Bears are also concerned that companies are buying back too many of their own shares. They argue that by using cash for buybacks, they are not investing in the business to generate growth in the future. This ignores the reality that companies often have enough cash to buy back their shares and to reinvest at the same time.

Analysts at the investment firm UBS have studied how companies are using their cash and their data supports a bullish conclusion. They did find that share buybacks are up by 16% compared to a year ago, so companies are using some cash to reduce the number of shares outstanding.

The research also found that companies are using cash to increase the amount they pay in dividends, with dividends up 11% compared to a year ago.

While buy backs and dividends do reward share holders, companies are also investing in the future. UBS found that capital expenditures, the amount of money companies reinvest into their existing operations, are up 39%. The increase marks a sharp break from the recent past when capex was declining or growing slowly. 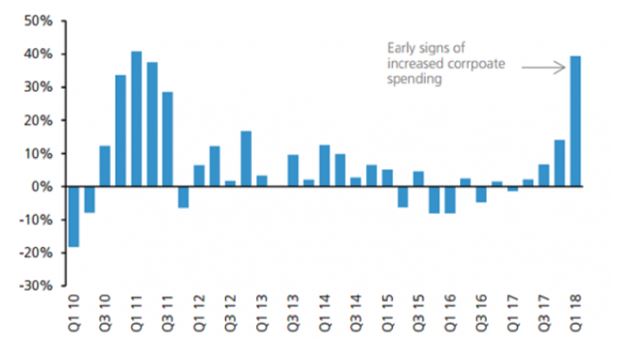 Analysts are finding reasons to be bullish based on earnings, sales and how companies are deploying their cash.

Analysts are most optimistic about the Telecom Services sector where this process shows a potential gain of about 19.5%.

All sectors are undervalued using this technique but the Energy (+6.9%) and Utilities (+7.3%) sectors are expected to see the smallest price increases, as these sectors have the smallest upside differences between the bottom-up target price and the closing price. 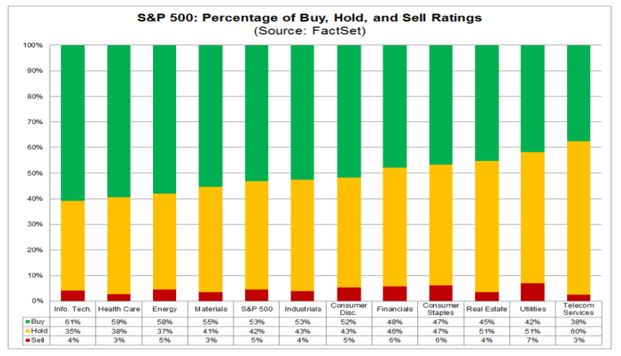 All of this indicates that investors could enjoy significant upside potential in the stock market over the next few months. The outlook of analysts is unusually bullish and companies are recording large gains in both sales and earnings.

The gain in sales is a reflection of a strong economy while the earnings are at least partly due to one-time tax gains. The bottom line for investors is that they should avoid panicking and enjoy the potential in the market as long as it is available to them.