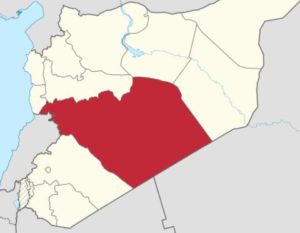 Last weekend, President Trump ordered military strikes in Syria, a response to the Syrian government’s decision to launch a chemical attack earlier this month. The U.S. action included the launch of 105 missiles, fired by U.S, French and British forces.

The U.S. and allied action was met with protests from Russia, which supports the Syrian government and has a number of forces in the country. Russia’s ambassador to the United States, Anatoly Antonov, warned that his country’s “worst apprehensions have come true” with the attack on Syria.

This was met with comments from the U.S Ambassador to the United Nations, Nikki Haley, who said the Treasury Secretary would soon announce fresh sanctions against Russia, specifically targeting “companies that were dealing with equipment related to Assad and chemical weapons use.”

After that statement, Trump reportedly decided to delay action against Russia.

Adding to the confusion, Defense Secretary James Mattis characterized the strikes as a “one time shot.” President Trump, however, noted that the United States was “prepared to sustain this response until the Syrian regime stops its use of prohibited chemical agents.”

For traders, all of this confusion offers opportunities.

Missiles Need To Be Replenished

For now, no one knows what will happen next in Syria. It could evolve into an extended conflict, either purposefully or by accident. There could also be a maintenance of the status quo with sporadic strikes like the two that Trump has authorized since he took office.

It seems unlikely that there will be widespread peace and calm in the short term. However, stock prices did rally on the news that the U.S. had acted, perhaps in relief that precision strikes were used in what many analysts agree was a proportionate response.

One analyst attributed the rally to the fact that “geopolitical conditions calmed.” Although the situation is calmer, it has not been defused. Given the likelihood of continued tensions, investors should consider defense stocks.

Among the considerations for investors is the fact that 19 Joint Air to Surface Standoff Missiles (JASSMs) manufactured by Lockheed Martin Corporation (NYSE: LMT) and 66 Tomahawk cruise missiles made by Raytheon Company (NYSE: RTN) will likely need to be replaced.

LMT has been in a strong up trend.

LMT is trading with a price to earnings (P/E) ratio of about 26 but analysts expect it to grow its earnings per share by an average of about 46% a year. This is due partly to the increase in the defense budget that was recently approved. The stock also offers a yield of about 2%.

It is important to remember that any U.S. fighter jets conducting airstrikes in Syria could be threatened by Russia’s effective S-400 long-range air defense missile system, which is deployed in western Syria near the Turkish border.

Analysts and military officials believe that Lockheed’s F-22 and F-35 are among the few aircraft effective against the S-400 due to their stealth capabilities. Northrop’s B-2 bomber could also be used in this environment according to the analysts.

RTN is also in a long term up trend.

This stock may not be as attractive to value investors as LMT. RTN trades with a P/E ratio of almost 30 and analysts expect earning growth to average about 17% a year. The dividend yield is about 1.6%.

Other Defense Contractors to Consider

Northrop Grumman (NYSE: NOC), as mentioned above, makes the B-2 stealth bomber, an aircraft suitable for operations in almost any operating environment around the world. In addition to the B-2, the company is working on the Air Force’s next long range bomber.

The Long Range Strike Bomber program (LRS-B) is a development and acquisition program to develop a long-range strategic bomber for the United States Air Force, intended to be a heavy-payload stealth aircraft capable of delivering thermonuclear weapons.

Initial capability is planned for the mid-2020s. The Air Force plans to purchase 80–100 LRS-B aircraft at a cost of $550 million each (2010 dollars). A development contract was awarded to Northrop Grumman for its B-21 Raider in October 2015.

The initial value of the contract is $21.4 billion, but the deal could eventually be worth up to $80 billion. In November 2017, the Congressional Budget Office estimated the total cost of the bomber to be $97 billion, $69 billion of which are attributed to development costs.

The head of the US Air Force Global Strike Command expects that 100 B-21 bombers is the minimum ordered and envisions some 175–200 bombers in service. Experts speculate that the bomber could also be used as an intelligence gatherer, battle manager, and interceptor aircraft.

The chart of NOC shows the now familiar pattern of other defense contractors.

The P/E ratio of the stock is about 27 and the dividend yield is near 1.3%. Analysts expect earnings per share growth to average about 13% in the future.

While these are the three leaders in the defense sector, they are each fairly high priced and that could make them unappealing to smaller investors. To overcome this problem, smaller investors could consider options strategies.

Buying a call option could provide exposure to the stock with less capital. Using spreads and other advanced strategies could also provide exposure without a large capital outlay. Options strategies also often have limited risk which could be appealing to any investor.

Another way to obtain exposure to the sector is with exchange traded funds. Trading candidates for this strategy include SPDR Kensho Future Security ETF (NYSE: XKFS) or iShares US Aerospace & Defense ETF (NYSE: ITA).

XKFS could be considered the more aggressive of the two but its also significantly smaller with assets of about $6 million compared to more than $5 billion in ITA. Smaller ETFs can be folded by their sponsor which could result in a forced sale or a period of time when the capital is not available to investors.

To avoid those risks, ITA could be the best choice. But, whatever choice an investor ultimately makes, defense stocks should be considered since the likelihood of global tensions remains high and the prospects of widespread peace seem remote.