Computers Might Be Making This Decline Worse, or Better

There has been a relentless shift on Wall Street ever since the first traders gathered under the buttonwood tree that grew on the spot of what is now the New York stock Exchange. That shift has been to adopt new technologies and strategies as soon as practical.

The rush to change is driven by the purpose of the gathering under the buttonwood tree. Traders were looking for a way to profit from fluctuations in business and that has been the objective of traders ever since.

But, as so many things in life have changed, the shift is towards speed and with computers, the fastest traders can make a profit. However, this shift has led to concerns that computers are driving the action on Wall Street.

In a recent article called Behind the Market Swoon: The Herdlike Behavior of Computerized Trading, The Wall Street Journal reported that,

“Behind the broad, swift market slide of 2018 is an underlying new reality: Roughly 85% of all trading is on autopilot—controlled by machines, models, or passive investing formulas, creating an unprecedented trading herd that moves in unison and is blazingly fast.

To many investors, the sharp declines are symptoms of the modern market’s sensitivities. Just as cheery sentiment about the future of big technology companies drove gains through the first three-quarters of the year, so too have shifting winds brought the market low in the fourth quarter. 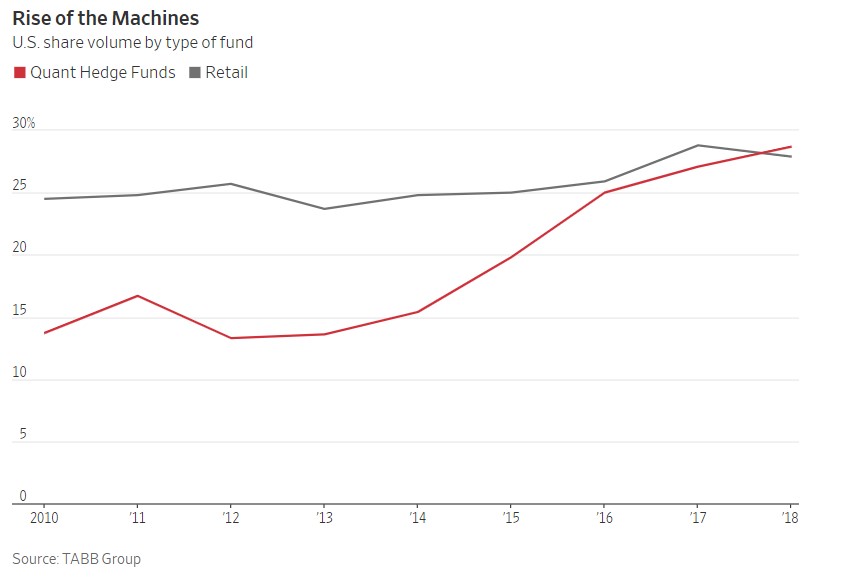 Today, quantitative hedge funds, or those that rely on computer models rather than research and intuition, account for 28.7% of trading in the stock market, according to data from Tabb Group–a share that’s more than doubled since 2013. They now trade more than retail investors, and everyone else.

Add to that passive funds, index investors, high-frequency traders, market makers, and others who aren’t buying because they have a fundamental view of a company’s prospects, and you get to around 85% of trading volume, according to Marko Kolanovic of JP Morgan .

It’s Been a Trend for Some Time

This is largely due to the fact, as The Wall Street Journal has previously reported, “up and down Wall Street, algorithmic-driven trading and the quants who use sophisticated statistical models to find attractive trades are taking over the investment world.

On many trading floors, quants are gaining respect, clout and money as investment firms scramble to hire mathematicians and scientists. Traditional trading strategies, such as sifting through balance sheets and talking to companies’ customers, are falling down the pecking order.

“A decade ago, the brightest graduates all wanted to be traders at Wall Street investment banks, but now they’re climbing over each other to get into quant funds,” says Anthony Lawler, who helps run quantitative investing at GAM Holding AG .

Electricity for the computers costs another $1 million a year.

Algorithmic trading has been around for a long time but was tiny.

An article in The Wall Street Journal in 1974 featured quant pioneer Ed Thorp. In 1988, the Journal profiled a little-known Chicago options-trading firm that had a secret computer system. Journal reporter Scott Patterson wrote a best-selling book in 2010 about the rise of quants.

Prognosticators imagined a time when data-driven traders who live by algorithms rather than instincts would become the kings of Wall Street.”

And they have, over time, been moving in that direction. Last year, quant hedge funds became the most active group on Wall Street. 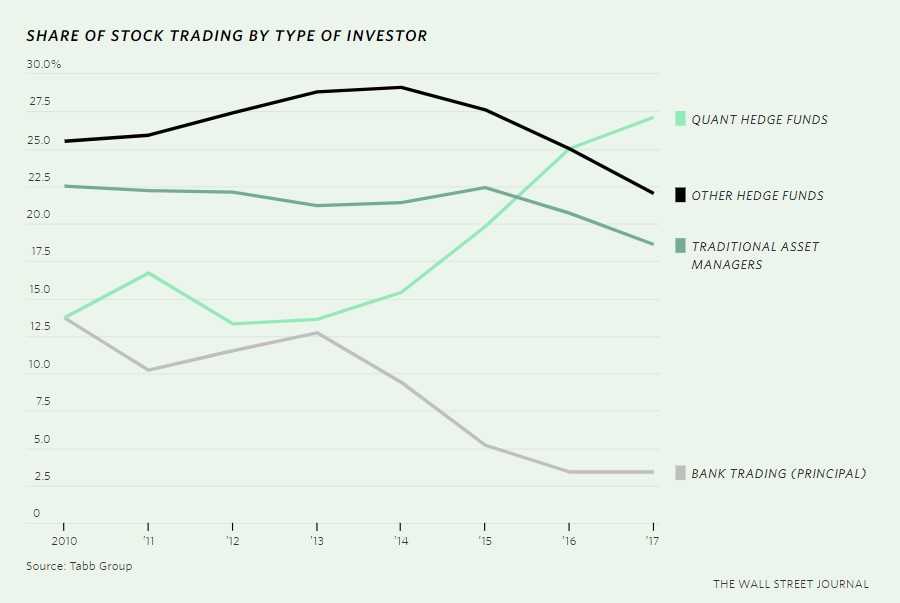 Now, “The speed and magnitude of the move probably are being exacerbated by the machines and model-driven trading,” says Neal Berger, who runs Eagle’s View Asset Management, which invests in hedge funds and other vehicles. “Human beings tend not to react this fast and violently.”

But, There are Still Trends

While computers and trading strategies make it possible for market moves to unfold in seconds, the moves are still driven by fundamental factors. Among those factors are:

So, there are reasons for the selling that has pushed major market averages significantly lower.

Computers are making the move quicker, according to some experts. However, since the computers are really executing programs written by humans, they are not the driving force behind the direction of the trend. They are merely accelerating the trend.

This is the good news. If computers accelerate the trend, that means the down trend and the bear market which seems to have hit stocks, could be over quicker than usual. Then, when news becomes bullish, prices could rebound quicker than usual.