One of the indicators many analysts consider in their market outlook is sentiment. This is usually applied as a contrary indicator.

This type of investing is defined by Investopedia as “Contrarian investing is an investment style in which investors purposefully go against prevailing market trends by selling when others are buying and buying when most investors are selling.

Contrarian investors believe that people who say the market is going up do so only when they are fully invested and have no further purchasing power. At this point, the market is at a peak. So, when people predict a downturn, they have already sold out, and the market can only go up at this point.”

Based on that type of analysis, gold could be a buy.

A recent article in The Wall Street Journal began with the headline, “Gold Prices Staged a Comeback, but Is It Sustainable?” As expected, based on that headline, the article warned investors that now might be the best time to look at adding gold to their portfolio.

The author noted, “Gold’s impressive rally since late last year already is facing a challenge: renewed confidence in the U.S. economy and a rebound in stocks.”

The S&P 500 sank 14% in the fourth quarter, driving investors into safer assets. Gold futures reaped the benefits, rallying 7.3%. Prices are currently near their highest level since June.

But analysts say that looking into 2019, investors remain largely confident that the U.S. economy will continue expanding. That means many likely will opt to ride out the volatility in share prices, rather than pile into havens such as gold.

The precious metal also has benefited from recent Federal Reserve comments that the central bank is willing to hit the brakes on its interest-rate increases in 2019 if growth slows.

When rates don’t rise as rapidly, gold becomes more attractive relative to yield-bearing securities such as Treasurys. A softer dollar also lifts the metal’s appeal by making it cheaper for overseas buyers. 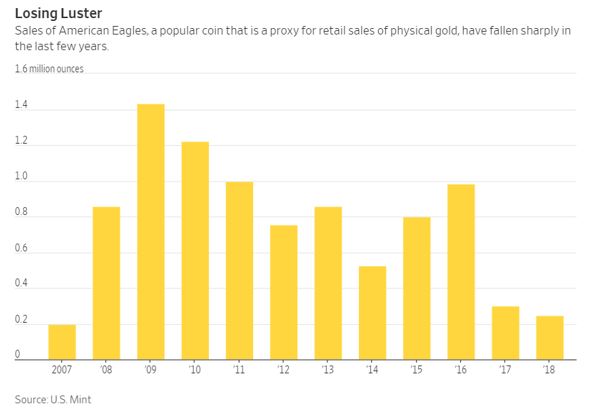 “Yet those same Fed comments also have boosted stocks and other risky assets this year—a development that could potentially lure investors back into such markets.

In other words, the gold market risks a repeat of what happened during much of last year. Faith in U.S. growth dampened demand for bullion. Prices tumbled as much as 10% last year, hitting a roughly 18-month low in August. The S&P 500 climbed as much as 9.6%, hitting multiple records.

[Recently], gold fell for a second consecutive session, while the benchmark equity gauge rose for a fifth straight day.

With gold, “the buying we’re seeing come in is cautious,” said Bob Haberkorn, senior market strategist at RJO Futures. “People are buying it mostly because of what’s going on with the Federal Reserve. That’s a different type of buying.”

The demand picture is mixed. Flows into gold-backed exchange-traded funds rose late in 2018, topping $3 billion last month for the first time since April, according to the World Gold Council.

But hedge funds and other speculative investors have remained wary. Bullish bets on prices barely exceeded bearish wagers on gold during the week ended Dec. 18, according to the latest figures from the Commodity Futures Trading Commission.

That is a shift from the second half of last year, when bearish bets topped bullish ones, but steady U.S. economic data or a resolution to the U.S.-China trade fight could quickly improve the outlook for global growth, souring sentiment toward gold.

Demand for physical bullion among individual investors also has been lackluster. Last year, annual sales of American Eagles, a popular gold coin that is a proxy for retail sales, fell to their lowest level since 2007, U.S. Mint data show. The weakness continued late into the year.

Prices still haven’t cleared the closely watched $1,300 level, indicating the metal could be stuck in its current range.

“If the Fed does in fact turn neutral to dovish, the rally in gold will be in contained because equities will also turn higher,” Mr. Haberkorn said.”

The Trend Is Your Friend

While the article does show that annual sales of gold coins are off and that there reasons to be skeptical of gold, many traders like to say that a bull market climbs a wall of worry. Those worrying about gold could be missing an opportunity.

Consider the next chart which shows the price of gold in the futures market.

The trend in this chart is clearly up. It is what technical analysts would call an orderly up trend rather than a sharply rising up trend that is commonly associated with bubbles. An orderly trend is one that is usually considered to be sustainable.

The longer term trend, based on weekly data is shown in the next chart.

This is also a bullish picture. The price could be in a broad consolidation pattern for the past two years and could be expected to rally back to the recent highs. A break out of the range could indicate a rally of more than 12% is likely.

And, there is the importance of noting gold’s role as a safe haven investment. As The Wall street Journal noted just weeks ago, when the author was more bullish on gold,

“Uneven economic data and volatility in stocks have accelerated a surge into assets perceived as relatively safe, highlighting the unease felt by many investors at the start of 2019.

The Japanese yen is up nearly 5% against the dollar since markets began sliding at the end of last year’s third quarter. That move picked up speed after weaker-than-expected manufacturing data and a sales warning from Apple Inc. last week bolstered fears of a global slowdown.

Other so-called haven assets are also rising. Gold prices have strengthened around 7% in that period and stand near their highest level in about half a year, and gold-focused funds have notched inflows in 12 of the past 13 weeks, according to fund tracker EPFR Global.”

Now could be a time to ignore the skeptics and consider adding gold to a portfolio.