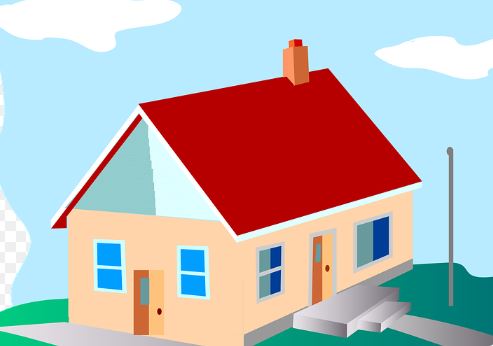 The Federal Reserve began raising short term interest rates in December 2015. At the time, the Fed Funds rate stood at about 0%. Officials increased the rate steadily and in September the Fed set the benchmark rate at a target of 2% to 2.25%.

The chart shows that the S&P 500 rose almost continuously as the Fed raised interest rates. But, now, suddenly, rates appear to be a problem.

Rates Are Just One Negative Factor in the Housing Market

One problem with higher interest rates is the impact the rates have on mortgages and the housing market. According to Barron’s:

“To be sure, those rate hikes, plus the prospect of more to come, have rippled through all borrowing costs, including those for home mortgages, lifting the 30-year fixed rate to 4.95% in the latest week, up nearly a full percentage point from its level a year earlier.”

Higher rates could be offsetting bullish factors for the housing market. Some analysts believe that favorable demographics, with millennials starting to form new households, jobs growing strongly, and consumer confidence high, should be the formula for a housing boom.

Higher mortgage rates must be why housing starts have plateaued around a 1.2 million unit annual rate, well below the peak of previous cycles which was above 2 million units a year. This is shown in the chart below.

One reason for the decline in construction could be the lack of affordable homes. Affordability is a problem for many potential home owners, especially the affordability of new homes where regulations add thousands of dollars to construction costs.

Analysts cited other factors that are potentially hurting the housing market:

Fink believes the $10,000 annual cap on federal deductions of state and local taxes has already hit states with high income-tax rates, such as California and many in the Northeast. But houses in cities such as Miami or Dallas in the $600,00 to $700,000 range might be affected, too.

He adds that even though Florida and Texas are famously state income-tax-free, property taxes on higher-priced homes in those locales can top the $10,000 SALT deduction limit.

All of this is already showing up in price data. Price gains for existing homes are decelerating as sales slow, to a 4.2% annual rate last month, down from 5.3% a year ago. The outlook for prices is even gloomier.

“ECRI’s home price downturn call is based on the growth rate of our U.S. Leading Home Price Index (USLHPI), which has now nosedived to its worst reading since 2009.

The USLHPI – which is specifically designed to predict home price cycles, spotting directional shifts well before conventional methods – is telling us that a home price downturn is much more than a possible risk.

That’s because the objective process that ECRI internally calls “three P’s” has delivered a resounding yes to the question of whether USLHPI growth is in a fresh cyclical downturn.” The index is shown in the chart below. 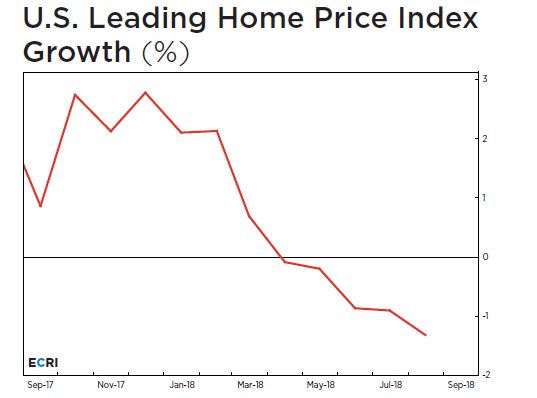 Lower home prices are expected to “dampen growth in homeowners’ spending on remodeling, to a 6.6% annual rate in the third quarter of 2019 from a projected peak of 7.7% in the current quarter,” according to a forecast from the Harvard Joint Center for Housing Studies.

That is one factor leading analysts at Credit Suisse to downgrade shares of Home Depot and Lowe’s, with analysts noting “slowing home-price appreciation reduces the “urgency” to do home repairs and upgrades, which would likely hurt the companies’ future earnings.”

Home builders’ stocks are already down by more than 20% and that is the definition of a bear market for a sector.

“Bank of America Merrill Lynch economists essentially confirmed the message already sent by home-building and related stocks: that housing will turn from being a slight tailwind for the economy to a mild headwind.

A housing price crash is unlikely, according to Capital Economics, although the advisory firm forecasts that the widely watched Case-Shiller measure could decline in real terms next year.

That’s a far sight from robust growth that would be expected during a period of historically low unemployment and modest mortgage rates.”

It is important for investors to remember that a housing down turn preceded the stock market crash in 2008. Now, no two stock market crashes are ever exactly the same but it does seem difficult to see how stock prices could soar while home prices fall.

Now, we appear to be in a time period when home prices will weigh on consumer balance sheets and sentiment. This could very well contribute to a bear market in stocks. It could also lead to lower spending as consumers watch wealth disappear and a slower economy.

Housing seems to be a leading indicator and is now forecasting a less bullish future for stocks.